Although Owen Sound officially became a City on June 1, 1920, the official celebrations were moved to July 1. In 1920, news of Owen Sound becoming a city was reported in newspapers outside the Grey-Bruce area. The Ottawa Citizen carried a brief article on July 2 entitled “Owen Sound Celebrates”. It was also referred to as “the baby city” in the Montreal Gazette in the article: “Owen Sound, the Baby City has a Very Long History,” Montreal Gazette, July 12, 1920, p. 9.

Richard Thomas of Richard Thomas Communications created for the Community Waterfront Heritage Centre, a series of eight short videos that tell the story of Owen Sound becoming a City in 1920.

You may watch the videos on the Community Waterfront Heritage Centre Channel on YouTube for the series or access them individually from the links below.

Celebrating a Century Exhibit is proudly sponsored by All Things T.

The exhibit panels were viewable in the Carnegie Wing of the Owen Sound & North Grey Union Public Library beginning November 17, 2020.

One hundred years ago in 1921, the The Owen Sound Transportation Company (OSTC) began. A group of local businessmen, principals in Owen Sound’s North American Bent Chair Company, formed the company. Their objective was to use the company’s steamboat, the S.S. Michipicoten, to provide freight-only service to isolated North Shore communities. From that one steamboat, the company grew.

Richard Thomas of R. T. Communications produced this series of eight videos for The Community Waterfront Heritage Centre. The series celebrates the 100th anniversary of The Owen Sound Transportation Company. The series begins with the early history of shipping in the Owen Sound harbour. The use of Owen Sound as a commercial port started in 1842, when storekeeper W.C. Boyd purchased a schooner, the Fly, to transport his family and supplies from Toronto. 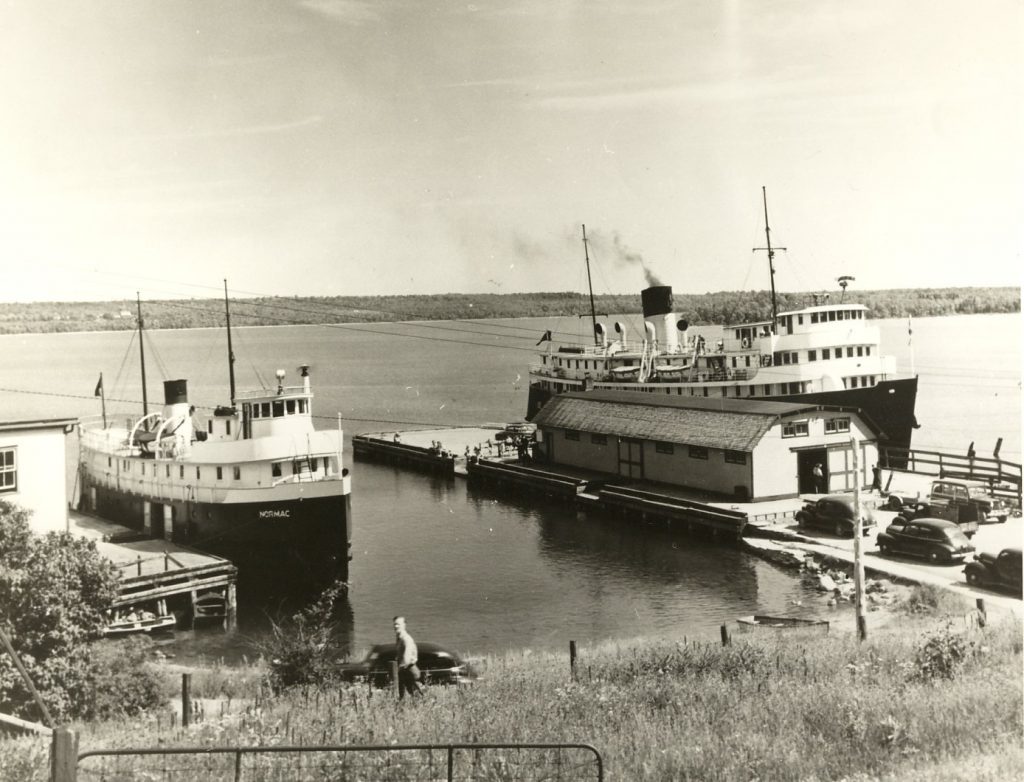 Black and white photo of the Normac [on left] and the Norgoma [on right] docked at the Manitowaning dock, Manitoulin Island. From the Archives of the Community Waterfront Heritage Centre, 1983.008.162

Both playlists, “The Owen Sound Transportation Company” and “Exhibit 2021,” have the eight videos.

Send Us a Message